BEAVERTON, Oregon — Biamp Systems, a leading provider of innovative, networked media systems, announced that its TesiraLUX™ audio/video distribution system has been recognized with Commercial Integrator’s 2017 BEST Award in the audio/video category. The award is an annual gathering of the most outstanding products and services impacting the commercial integration industry and was announced at InfoComm 2017 held in June in Orlando, Florida. 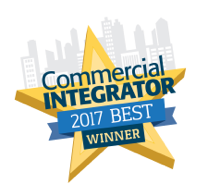 Biamp’s TesiraLUX introduces low-latency, 4K-networked video capabilities to the Tesira® ecosystem through the addition of an AVB/TSN-enabled video encoder (TesiraLUX IDH-1) and decoder (TesiraLUX OH-1). This groundbreaking solution transports both audio and video signals over a single network through the reliability of AVB/TSN. The Tesira platform is the only network AV solution available that handles both audio and video processing, while providing integrators and system designers the tools to determine what to send over the network, enabling them to treat content types appropriately. The result is visually lossless transmissions and with the best use of the available network bandwidth. The TesiraLUX IDH-1 encoder features one HDMI port, one DisplayPort port, and two mic/line-level analog inputs. The TesiraLUX OH-1 decoder includes one HDMI port and two line-level analog outputs.

TesiraLUX supports the latest video formats, including 4096x2160 at 60-Hz, HDR, and the Rec. 2020 color space. It accepts video at up to 16-bit color depth with 4:4:4 chroma subsampling, and supports eight channels of embedded PCM audio, which can be routed and processed independently. Scalers in the encoder and decoder allow for automatic EDID management between the TesiraLUX device and the input source/output display.

The Commercial Integrator BEST Award selections were judged by an unbiased panel of a dozen industry leaders, along with the editors of Commercial Integrator, with special consideration given to innovation, functionality, competitive advantages, and benefits to the installer.

Related Products
Tesiralux OH-1 AVB VIDEO DECODER
Model: TesiraLUX OH-1
TesiraLUX IDH-1 - AVB/TSN Enabled Video Encoder
Model: TesiraLUX IDH-1
You must be logged in to add more than four items to your comparison list.
Register today!
With a free My-iQ account, you'll be able to keep track of the latest updates and event notifications from your favorite AV manufacturers, manage your own projects and discover new pro-AV products.
register now
close
Thank you!
Someone will be in touch with you shortly.
Contact Key Code Media, Inc.
close